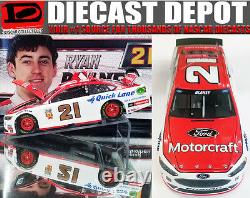 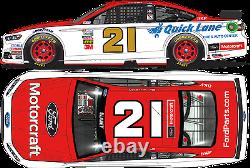 RYAN BLANEY 2017 MOTORCRAFT #21 FUSION 1/24 ACTION. By all accounts, Ryan Blaneys first full season at NASCAR®s top level was a success. Through the first 31 races of 2016, the 22-year-old driver collected three top-five and eight top-10 finishes. His best showings are a pair of fourth-place performances at Michigan and Chicagoland.

In 2017, Blaney looks to build upon that success and improve behind the wheel of the No. Long-time Wood Brothers Racing sponsor, Motorcraft, will return next season for the 18th consecutive year on the teams No. Motorcraft first served as primary sponsor on the No. 21 car in the 2000 season finale. It wont be long before Blaney becomes a regular in Victory Lane and when he does youll want to make sure you have an Action Racing Collectables die-cast of his No.

21 Motorcraft Ford Fusion to show off to your friends. Act fast, place your order today!

This is an Action Performance Platinum Series collectible, the #1 name in NASCAR diecast collectible cars. We have been serving thousands of NASCAR fans online since 1999.

Your item is brand new. No smoke , no pets, Brand new out of a new case. The item "RYAN BLANEY 2017 MOTORCRAFT #21 FUSION 1/24 SCALE ACTION NASCAR DIECAST" is in sale since Thursday, August 24, 2017. This item is in the category "Toys & Hobbies\Diecast & Toy Vehicles\Cars\ Racing, NASCAR\Sport & Touring Cars".