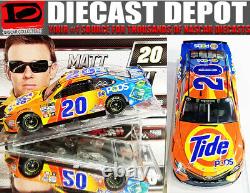 MATT KENSETH 2017 TIDE 1/24 ACTION. The Tide Ride is back! Joe Gibbs Racing driver Matt Kenseth brings Tide back to the track for three Monster Energy NASCAR® Cup Series races in 2017 Phoenix in March, Indy in July, and Charlotte in October. And Lionel Racing is excited to offer fans the officially licensed die-cast of Kenseths No.

Each 1:24-scale replica will be produced on a base, and will feature an opening hood and trunk, rolling Goodyear tires, and a host of authentic deco details. This is an Action Performance Platinum Series collectible, the #1 name in NASCAR diecast collectible cars.