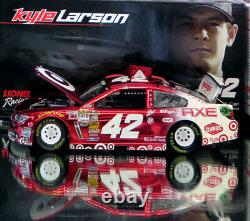 KYLE LARSON 2014 TARGET COLOR CHROME 1/24 ACTION (ONLY 72 MADE). Only 72 of these individually numbered pieces were made. They feature a shiny "color chrome" special finish. NASCAR Nationwide SeriesT driver Kyle Larson had a benchmark season in 2013. Not only did Larson take home the title of the 2013 Rookie of the Year award, but he competed in his first ever NASCAR Sprint Cup SeriesT race.

In 2014, Larson will be suiting up for one unforgettable rookie season in the NASCAR Sprint Cup SeriesT behind the wheel of the No. 42 Target Chevrolet SS for Chip Ganassi Racing with Felix Sabates. Race fans everywhere will be brimming with anticipation as they wait to see what this rising star will bring to the sport's elite series this year. Crafted with over 180 parts and pieces - the Action Racing Collectables die-cast of Larson's No. 42 Target Chevrolet SS is incredibly detailed and is now available for pre-order.

Don't miss your chance to own the die-cast of one of NASCAR'S® most promising drivers! This is an Action Performance Platinum Series collectible, the #1 name in NASCAR diecast collectible cars. This item is in the category "Toys & Hobbies\Diecast & Toy Vehicles\Cars: Racing, NASCAR\Sport & Touring Cars". The seller is "diecast_dealer" and is located in this country: US. This item can be shipped to United States.