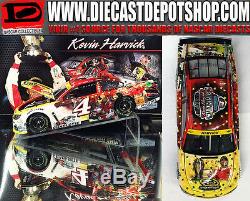 The 2014 season proved to be monumental for Stewart-Haas Racing driver Kevin Harvick. With 14 top-five finishes, eight pole positions, 2,137 laps led and five victories, Harvick wrapped up the season atop the leaderboard, driving away with his first NASCAR Sprint Cup Series championship title. And now, Lionel Racing is excited to present the 1:24-scale Action Racing Collectables die-cast that captures the excitement all over again! This fantasy die-cast is comprised of over 180 individual parts and pieces and features imagery that highlights Harvicks winningest moments of 2014.

The item "KEVIN HARVICK 2014 CHAMPIONSHIP MONTAGE SPECIAL 1/24 ACTION" is in sale since Saturday, March 10, 2018. This item is in the category "Toys & Hobbies\Diecast & Toy Vehicles\Cars\ Racing, NASCAR\Other Diecast Racing Cars". The seller is "diecast_dealer" and is located in Gainesville, Georgia. This item can be shipped to United States.