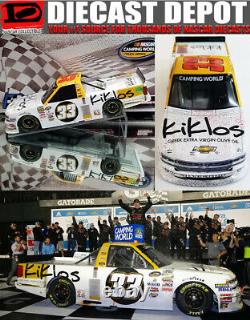 This diecast truck is made by Action (Lionel Racing), the #1 name in motorsports collectibles. Lionel Racing artists have also painstakingly reproduced all the race damage seen on these winning trucks to create truly authentic replicas. We have been serving thousands of NASCAR fans online since 1999. We also operate a full-fledged walk-in store located in Gainesville, GA. We take collecting diecast seriously.