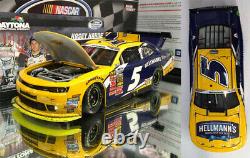 KASEY KAHNE 2014 DAYTONA WIN RACED VERSION HELLMANS 1/24 ACTION. Limited edition of 721 made. At DAYTONA International Speedway® on July 4, Kasey Kahne outraced the competition, landing the No. 5 Hellmann's® Chevrolet Camaro in Victory Lane! With strategic placement on the highline and a little extra push from a fellow competitor, Kahne took the checkers with a 0.021-second margin of victory over his second-place competitor - the eighth-closest finish in NASCAR Nationwide SeriesT history. This was Kahne's first win in the series since 2007 and the sixth win for JR Motorsports this season. Don't miss your chance to own the Action Racing Collectables Raced-Win die-cast of Kahne's No. 5 Hellmann's® Chevrolet Camaro. Each die-cast is officially licensed by NASCAR® and features the markings of every scrape and scuff!

This is an Action Performance Platinum Series collectible, the #1 name in NASCAR diecast collectible cars. This item is in the category "Toys & Hobbies\Diecast & Toy Vehicles\Cars: Racing, NASCAR\Sport & Touring Cars". The seller is "diecast_dealer" and is located in this country: US. This item can be shipped to United States.