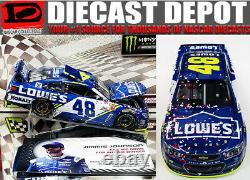 JIMMIE JOHNSON 2017 DOVER WIN RACED VERSION LOWE'S 1/24 ACTION. Limited edition of 493 made. The reigning NASCAR® champion is now tied with NASCAR Hall of Fame driver Cale Yarborough for sixth place on the sports all-time win list. After a power move to the front on an overtime restart, Jimmie Johnson won his 11th race at Dover and drove into the history books.

Lionel Racing is excited to offer the Race Win die-cast that commemorates this historic moment for all time. Crafted with exceptional attention to detail, each of these 1:24-scale die-cast is built with an opening hood and trunk, rolling Goodyear tires, and the race debris and confetti seen on Johnsons No. 48 Chevrolet SS in Victory Lane. Racing Series: NASCAR Cup Series. We have been serving thousands of NASCAR fans online since 1999.

No smoke , no pets, Brand new out of a new case. The item "JIMMIE JOHNSON 2017 DOVER WIN RACED VERSION LOWE'S 1/24 ACTION new" is in sale since Monday, December 7, 2020. This item is in the category "Toys & Hobbies\Diecast & Toy Vehicles\Cars\ Racing, NASCAR\Sport & Touring Cars". The seller is "diecast_dealer" and is located in Gainesville, Georgia. This item can be shipped to United States.