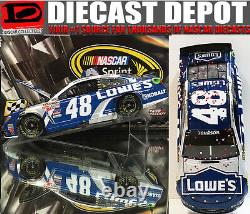 JIMMIE JOHNSON 2015 TEXAS WIN RACED VERSION 1/24 ACTION. Limited edition of 677 made. Heading into the AAA Texas 500 at Texas Motor Speedway only seven drivers had won 75 or more races in NASCAR®s premier series. By the end of Sunday, Jimmie Johnson had added his name to that elite list.

Johnson made a late-race pass to take the lead with four laps to go in the 334-lap race. He held the lead for the rest of the race, finishing 1.082 seconds in front of the second-place finisher.

The win was Johnsons fifth of 2015 and sixth at the track, becoming the first driver to win three consecutive series races at Texas and only the third to sweep both Texas races in a single season. The Action Racing Collectables die-cast of Johnsons No. 48 Lowes Chevrolet SS is now available from Lionel Racing. Each die-cast replicates how the race car looked in Victory Lane, complete with scuffs, dents and Texas-shaped confetti. This is an Action Performance Platinum Series collectible, the #1 name in NASCAR diecast collectible cars.