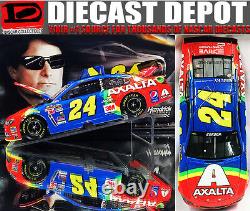 JEFF GORDON 2015 RETRO RAINBOW AXALTA 1/24 ACTION. 24 Rainbow paint scheme is one of the most iconic in NASCAR® history, and it will appear on Gordons No. 24 Chevrolet SS one last time! Now, race fans can own the Action Racing Collectables Diecast of Gordons No. Each die-cast features over 180 individual parts and pieces and contains incredible detail to replicate this throwback paint scheme.

This is guaranteed to be one of the hottest die-cast of 2015. This is an Action Performance Platinum Series collectible, the #1 name in NASCAR diecast collectible cars. We have been serving thousands of NASCAR fans online since 1999.

We also operate a full-fledged walk-in store located in Gainesville, GA. We take collecting diecast seriously. The cars we send are mint, unless specifically stated. Your item is brand new- no smoke , no pets, brand new out of a new case.