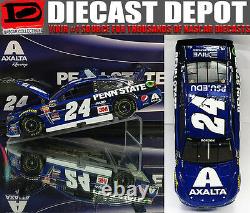 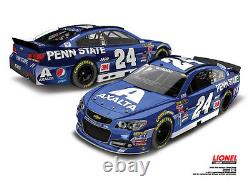 JEFF GORDON 2015 PENN STATE/ AXALTA 1/24 ACTION. With its mission of teaching, research, and service with pride and focus on the future, Penn State® University ranks in the top 1 percentile of higher education institutions worldwide. Also topping the leaderboard of success is Axalta Coating Systems and their partnership with NASCAR Sprint Cup Series driver Jeff Gordon. With 92 career wins and four championship titles, Gordon is one of the greatest competitors in the sport.

On June 7 at Pocono Raceway, just down the road from Happy Valley, Gordon and Axalta will join forces with Penn State® University as they race a special version of the famous No. Now available for pre-order is the Action Racing Collectables die-cast of Gordons No.

24 Axalta Penn State® Chevy SS. Each die-cast is highly detailed to replicate this exciting new paint scheme. This is a collectible that Penn State® and Gordon fans wont want to miss! This is an Action Performance Platinum Series collectible, the #1 name in NASCAR diecast collectible cars. We have been serving thousands of NASCAR fans online since 1999. We also operate a full-fledged walk-in store located in Gainesville, GA. We take collecting diecast seriously. The cars we send are mint, unless specifically stated otherwise. Your item is brand new- no smoke , no pets, brand new out of a new case. The item "JEFF GORDON 2015 PENN STATE/ AXALTA 1/24 SCALE ACTION NASCAR DIECAST" is in sale since Thursday, June 21, 2018. This item is in the category "Toys & Hobbies\Diecast & Toy Vehicles\Cars\ Racing, NASCAR\Other Diecast Racing Cars".