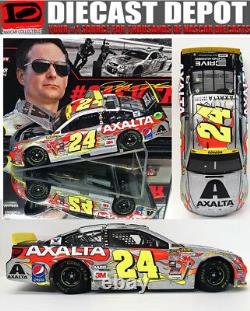 After a career spanning 24 seasons highlighted by four NASCAR Sprint Cup Series championships and 93 wins, Gordon made his final start in the Ford EcoBoost 400. As one of four drivers still in title contention, Gordon had an opportunity to go out on top. While his sixth-place finish with nine laps led was respectable, it wasn't enough to earn him his fifth championship. Putting his driving acumen aside, Gordon did so much for this sport that could never be quantified.

He still leaves a champion for all he has done and meant to the sport. To commemorate Gordons final ride in his legendary career, Lionel Racing is excited to offer a Raced version die-cast of the No.

24 AXALTA Chevrolet SS he drove at Homestead. The die-cast will look just as it did when he finished the race, and will come with all the Chase indicators. This is an Action Performance Platinum Series collectible, the #1 name in NASCAR diecast collectible cars. We have been serving thousands of NASCAR fans online since 1999.

No smoke , no pets, Brand new out of a new case. The item "JEFF GORDON 2015 HOMESTEAD FINAL RIDE AXALTA RACED VERSION 1/24 ACTION DIECAST" is in sale since Friday, May 8, 2020. This item is in the category "Toys & Hobbies\Diecast & Toy Vehicles\Cars\ Racing, NASCAR\Sport & Touring Cars". The seller is "diecast_dealer" and is located in Gainesville, Georgia. This item can be shipped to United States.