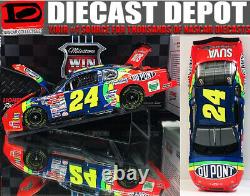 JEFF GORDON 2000 DIEHARD 500 TALLADEGA WIN RACED VERSION 1/24 ACTION. Limited edition of 1,369 made. In NASCARs 67 years, there have been thousands of drivers who have suited up and taken their turns at helming a race car in the NASCAR Sprint Cup Series. Some careers were short-lived, while others stuck around a lot longer. However, only 12 drivers have reached the 50-win mark in the series. Among the legendary names on the list is Jeff Gordon. Gordons milestone 50th win came in the 2000 DieHard 500 at Talladega Superspeedway where he started near the back of the field. Yet, by the end of the day he had fought his way to the front in the No. 24 DuPont Automotive Finishes Chevrolet. The Race Win die-cast version of the car Gordon captured the checkered flag in is now available for the first time ever just as it looked when he and his team celebrated in Victory Lane. This is an Action Performance Platinum Series collectible, the #1 name in NASCAR diecast collectible cars. We have been serving thousands of NASCAR fans online since 1999.