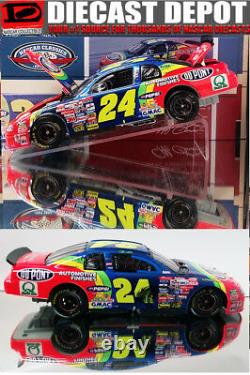 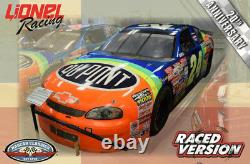 JEFF GORDON 20TH ANNIVERSARY OF HIS FIRST DAYTONA 500 WIN 1997 DUPONT RACED VERSION 1/24 ACTION. Limited edition of 1,524 made. In celebration of the 20th Anniversary of Jeff Gordons first DAYTONA 500® victory, Lionel Racing is excited to announce the next jewel in their NASCAR® Classics line the No. 24 DuPont Refinishes Chevrolet Monte Carlo Race Win die-cast.

Gordon took the lead for the final time in the 1997 Daytona 500® when he dropped below the leader going into Turn 1 with six laps left. A lap later the yellow flag came out for a multi-car accident in Turn 4 and the race ended under caution. It was Gordons 20th victory. Hendrick Motorsports cars finished 1-2-3 with Gordon leading 40 laps. It was the first of his 10 wins that year a season in which he captured his second of four championships.

Never forget Gordons 1997 DAYTONA 500® win by pre-ordering the Action Racing Collectables Race Win diecast of his No. 24 DuPont t Refinishes Chevrolet Monte Carlo that features race damage. This is an Action Performance Platinum Series collectible, the #1 name in NASCAR diecast collectible cars. We have been serving thousands of NASCAR fans online since 1999.