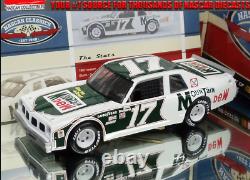 His results were a sixth-place standing and a dominating win. In the fall race, Waltrip led 152 of 200 laps earning one win in the only two outings of this Mountain Dew car.

Now, as part of the NASCAR Classics series, Lionel NASCAR Collectables is excited to offer for the first time both the 1:24 and 1:64 die-cast of this winning Waltrip car. This must-have collectible for Waltrip fans has never been offered before. ACTION FEATURES: This diecast NASCAR collectible features an all Diecast body and chasis; opening hood , trunk, and roof flaps; detailed engine and trunk compartments; and more!

We take collecting diecast seriously. The cars we send are mint, unless specifically stated. Your item is brand new. No smoke , no pets, Brand new out of a new case. The item "DARRELL WALTRIP 1982 MOUNTAIN DEW PONTIAC 1/24 ACTION" is in sale since Saturday, May 16, 2020.