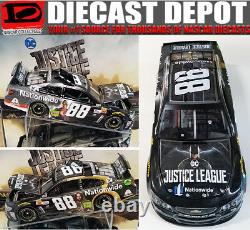 For one race only, both Earnhardt's No. 88 Nationwide Chevrolet and Kahne's No.

5 Great Clips machine will be emblazoned with the characters of DC Comics' upcoming blockbuster - JUSTICE LEAGUET. Batman, Aquaman, and Cyborg will be powering Earnhardt's famous No.

88, while Kahne's ride will be fueled by Superman, Wonder Woman, and The Flash. Now Hendrick Motorsports fans can own the officially licensed die-cast that replicate the JUSTICE LEAGUET race cars seen on track. This is an Action Performance Platinum Series collectible, the #1 name in NASCAR diecast collectible cars. We have been serving thousands of NASCAR fans online since 1999.

Your item is brand new. No smoke, no pets, Brand new out of a new case. This item is in the category "Toys & Hobbies\Diecast & Toy Vehicles\Cars: Racing, NASCAR\Sport & Touring Cars". The seller is "diecast_dealer" and is located in this country: US.