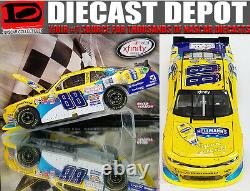 Earnhardt started the race third and quickly charged toward the front, leading Laps 18-129 in the No. He retook the lead on Lap 134 and held onto it through the remainder of the race 16 laps later. Earnhardt and JR Motorsports fans wont want to miss out on the Action Racing Collectables die-cast that replicates the No.

88 Hellmanns Chevrolet Camaro as it appeared in Victory Lane. Each die-cast includes all the scuffs, dents and confetti Earnhardts car received during the race and post-race celebration.

This is an Action Performance collectible, the #1 diecast collectible in Motorsports. ACTION GOLD SERIES FEATURES: This diecast NASCAR collectible features an all diecast body ; opening hood ; detailed engine compartment; and more! We have been serving thousands of NASCAR fans online since 1999. We also operate a full-fledged walk-in store located in Gainesville, GA. We take collecting diecast seriously.

The cars we send are mint, unless specifically stated. Your item is brand new- no smoke , no pets, brand new out of a new case.