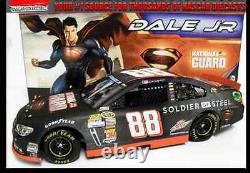 DALE EARNHARDT JR 2013 SUPERMAN "SOLDIER OF STEEL" NATIONAL GUARD SPECIAL 1/24 ACTION. Limited edition of 4,128 individually numbered pieces made. The men and women of the National Guard are American heroes who put on the uniform and rush in to help whenever duty calls.

Ran this paint scheme at Michigan International Speedway on June 16 - racing with the power of the National Guard behind him and also the heroic strength of another American icon Man of Steel. Through this project the National Guard developed a comprehensive national recruiting campaign named Soldier of Steel which is designed around the June 14 release of Warner Bros. Superman, an ordinary citizen, seeks to serve his community much like the National Guard Citizen-Soldiers serve theirs every day. Together the military values align with Supermans creed: Truth, Justice and the American Way.

To help promote the SOLDIER of STEEL partnership, Earnhardts Michigan Chevrolet SS features both SOLDIER of STEEL and Man of Steel logos in a powerful paint scheme worthy of whats sure to be one of the biggest blockbusters of the summer. Both Earnhardt and Man of Stee l fans wont want to miss the No. 88 National Guard/Man of Stee l die-cast. With a replica one-race only paint scheme and incredible details, this die-cast car is anticipated to be one of the biggest sellers of 2013.

This is an Action Performance Platinum Series collectible, the #1 diecast collectible in Motorsports. ACTION FEATURES: This diecast NASCAR collectible features an all Diecast body and chasis; comes individually numbered; opening hood , trunk, and roof flaps; detailed engine and trunk compartments; and more! We have been serving thousands of NASCAR fans online since 1999. We also operate a full-fledged walk-in store located in Gainesville, GA. The item "DALE EARNHARDT JR 2013 SUPERMAN SOLDIER OF STEEL NATIONAL GUARD 1/24 Action" is in sale since Saturday, February 17, 2018.