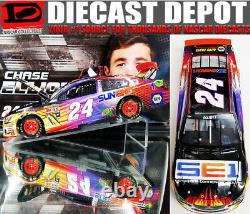 CHASE ELLIOTT 2016 SUN ENERGY #24 CHEVY 1/24 ACTION. Limited edition of 1,105 made. As a rookie driver in the NASCAR Sprint Cup Series, there are a lot of firsts Chase Elliott will encounter over the course of the year. Four races into the young season, hes already won his first pole position and competed in his first DAYTONA 500®.

Later this season, Elliott will make his Watkins Glen series debut in the No. 24 Chevrolet SS, which will be sponsored by SunEnergy1 one of the worlds largest privately held solar energy companies. He will also pilot the SunEnergy1-sponsored car in his second trips to Daytona (July), Kansas (October) and Phoenix (November). Lionel Racing is excited to now offer Elliotts No. 24 SunEnergy1 Chevrolet SS as an Action Racing Collectables die-cast. Each diecast is beautifully designed and crafted and will stand out in any collection. This is an Action Performance Platinum Series collectible, the #1 name in NASCAR diecast collectible cars. We have been serving thousands of NASCAR fans online since 1999. We also operate a full-fledged walk-in store located in Gainesville, GA. We take collecting diecast seriously. The cars we send are mint, unless specifically stated. Your item is brand new. No smoke , no pets, Brand new out of a new case.. The item "CHASE ELLIOTT 2016 SUN ENERGY #24 CHEVY 1/24 SCALE ACTION NASCAR DIECAST" is in sale since Tuesday, June 9, 2020.