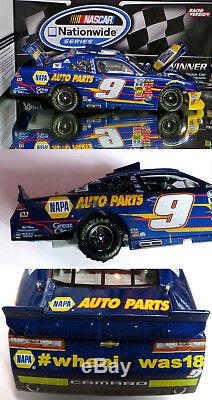 9 NAPA Chevrolet Camaro in Victory Lane. Now race fans can own the one-of-a-kind Action Racing Collectables die-cast of Elliotts winning No. Featuring scratches, scrapes and scuffs, each die-cast is highly detailed and a must have! This is an Action Performance Platinum Series collectible, the #1 name in NASCAR diecast collectible cars. We have been serving thousands of NASCAR fans online since 1999. We also operate a full-fledged walk-in store located in Gainesville, GA. We take collecting diecast seriously. The cars we send are mint, unless specifically stated. Your item is brand new.