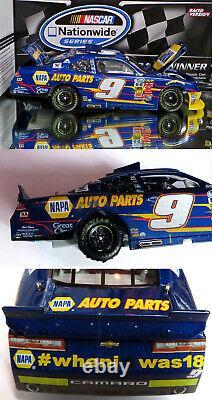 CHASE ELLIOTT 2014 CHICAGO WIN RACED VERSION BURNOUT NAPA 1/24 ACTION (#wheniwas18). This raced version features the blown tire from Chase Elliott's victory burnout, as well as #wheniwas18 on the bumper! Limited edition of 1,201 made. The crowd went wild at Chicagoland Speedway on July 19, when Chase Elliott drove to his third NASCAR Nationwide SeriesT win of the season.

In his first career start at the Windy City track, the rookie proved yet again that he's got the "Know How" when it comes to racing. Leading a race-high 85 laps, Elliott dominated the race and landed the No. 9 NAPA Chevrolet Camaro in Victory Lane. Now race fans can own the one-of-a-kind Action Racing Collectables die-cast of Elliott's winning No.

Featuring scratches, scrapes and scuffs, each die-cast is highly detailed and a must have! This is an Action Performance Platinum Series collectible, the #1 name in NASCAR diecast collectible cars. We have been serving thousands of NASCAR fans online since 1999. We also operate a full-fledged walk-in store located in Gainesville, GA.

We take collecting diecast seriously. The cars we send are mint, unless specifically stated otherwise.

Your item is brand new- no smoke, no pets, brand new out of a new case.. This item is in the category "Toys & Hobbies\Diecast & Toy Vehicles\Cars: Racing, NASCAR\Sport & Touring Cars". The seller is "diecast_dealer" and is located in this country: US.