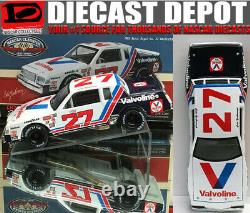 CALE YARBOROUGH 1982 VALVOLINE BUICK 1/24 ACTION. Limited edition of 973 made. Just like Darlington Raceway, Cale Yarborough has always been Too Tough to Tame.

Born less than 20 miles from the oldest superspeedway in NASCAR, Yarborough used to sneak onto track property in the 1950s just to watch the greats of the sport race for glory. But that was long before he became a racing icon. Now a member of the NASCAR Hall of Fame, Yarborough boasts five wins at Darlington Raceway - and one of them came in this 1982 Valvoline Buick that he drove for owner M. Anderson in the Southern 500.

For the first time ever, this classic Yarborough ride is now available as a 1:24-scale die-cast car! This limited-edition die-cast from Lionel Racing re-creates Yarboroughs 1982 paint scheme with incredible attention to detail.

With an authentic graphics package, Goodyear Eagle tires, and an opening hood, its a must-have for longtime fans of the sport. Comes packaged in a NASCAR Classics box.

This is an Action Performance collectible, the #1 name in NASCAR diecast collectible cars. We have been serving thousands of NASCAR fans online since 1999. We also operate a full-fledged walk-in store located in Gainesville, GA. We take collecting diecast seriously.