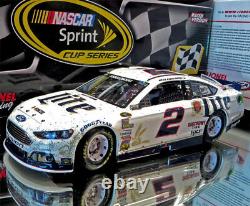 BRAD KESELOWSKI 2014 LAS VEGAS WIN MILLER LITE WHITE RACED VERSION 1/24 ACTION. Limited edition of 649 made. The stakes were high at Las Vegas Motor Speedway when the NASCAR Sprint Cup Series rolled in to town for the third race of the season. Making all the right moves, Brad Keselowski hit the jackpot taking the checkered flag and clinching his first NASCAR Sprint Cup Series win in 2014. Now available for pre-order is the Action Racing Collectables Raced-Win die-cast of Keselowskis No.

2 Miller Lite White Ford Fusion. Each features painstaking details like tire scuffs and scratch marks. Also, each die-cast is decod with confetti and is delivered with an actual size Official Winner sticker and a bag of confetti from Victory Lane!

This is an Action Performance Platinum Series collectible, the #1 diecast collectible in Motorsports. All Diecast body and chasis; opening hood , trunk, and roof flaps; detailed engine and trunk compartments; and more! We have been serving thousands of NASCAR fans online since 1999. We also operate a full-fledged walk-in store located in Gainesville, GA.

We take collecting diecast seriously. The cars we send are mint, unless specifically stated. Your item is brand new. No smoke , no pets, Brand new out of a new case.