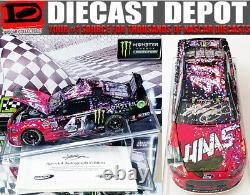 These come personally autographed by Kurt Busch himself and include a Lionel certificate of authenticity. In a last lap power move to the front of the field, Kurt Busch took the checkered flag for the first time in the DAYTONA 500®. Bush outlasted a caution-filled race to wheel the No.

41 Haas Automation/Monster Energy® Ford Fusion to Victory Lane. The victory was also Stewart-Haas Racings first win as a Ford team. Now fans can order the Race Win die-cast of Buschs winning ride which will be detailed with incredible race damage - including a right side scrape that testifies to the fight it took for Busch to reign supreme. This is an Action Performance Platinum Series collectible, the #1 name in NASCAR diecast collectible cars. We have been serving thousands of NASCAR fans online since 1999.