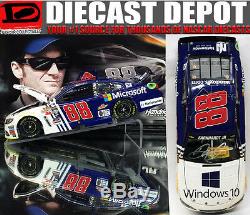 AUTOGRAPHED DALE EARNHARDT JR 2015 MICROSOFT WINDOWS 10 1/24 ACTION. Limited edition of only 360 made. Personally autographed by Dale Jr on the windshield. Comes with a certificate of authenticity from Lionel. Last June, Dale Earnhardt Jr.

Notched a career-best third-place finish at Sonoma Raceway. This summer, he looks to improve upon that performance by ending his day in Wine Country with a trip to Victory Lane. Despite where NASCARs most popular driver finishes in the running order that day, his Chevrolet SS will be sporting a classic blue and white paint scheme from Microsoft, a first-time primary sponsor for Earnhardt. This is an Action Performance Platinum Series collectible, the #1 name in NASCAR diecast collectible cars. We have been serving thousands of NASCAR fans online since 1999.

The cars we send are mint, unless specifically stated. Your item is brand new- no smoke , no pets, brand new out of a new case. The item "AUTOGRAPHED DALE EARNHARDT JR 2015 MICROSOFT WINDOWS 10 1/24 ACTION" is in sale since Monday, November 14, 2016. This item is in the category "Toys & Hobbies\Diecast & Toy Vehicles\Other Vehicles\Contemporary Manufacture".