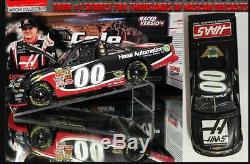 Each truck comes personally autographed by Cole Custer on the windshield. Included certificate of authenticity from Lionel. History was made on September 20 at New Hampshire Motor Speedway when 16-year-old Cole Custer became the youngest driver to win a NASCAR® national series race. In just his seventh NASCAR Camping World Truck Series start, Custer started the UNOH 175 from the pole position and with four laps remaining, claimed the lead and powered to the win by 1.1 seconds over the second-place competitor. Race fans dont want to miss the Action Racing Collectables die-cast of Custers winning No.

Each die-cast will be produced in a hood open version with a full die-cast body and chassis. With life like detail and a replica paint scheme, this die-cast is the perfect way to commemorate Custers history-making moment. This is an Action Performance Platinum Series collectible, the #1 diecast collectible in Motorsports.

FEATURES: All Diecast body and chasis; opening hood; comes individually numbered; detailed engine compartments; and more! We have been serving thousands of NASCAR fans online since 1999. We also operate a full-fledged walk-in store located in Gainesville, GA. We take collecting diecast seriously. The cars we send are mint, unless specifically stated.

Your item is brand new. No smoke , no pets, Brand new out of a new case.. The item "AUTOGRAPHED COLE CUSTER 2014 NEW HAMPSHIRE WIN RACED VERSION TRUCK 1/24 ACTION" is in sale since Sunday, December 8, 2019. This item is in the category "Toys & Hobbies\Diecast & Toy Vehicles\Cars\ Racing, NASCAR\Other Diecast Racing Cars". The seller is "diecast_dealer" and is located in Gainesville, Georgia.