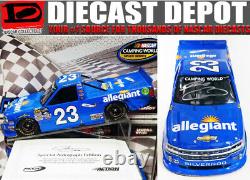 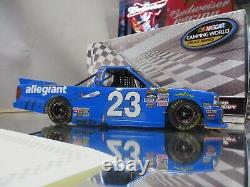 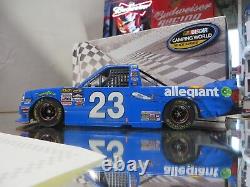 (EXCLUDED FROM COUPONS) Limited edition of 72 made. Personally autographed by Chase Elliott himself.

Includes certificate of authenticity from Lionel. He started on the pole and he ended up in Victory Lane.

With just 12 laps to go in the Alpha Energy Solutions 250 at Martinsville Speedway, Chase Elliott held off his GMS Racing teammate and powered the No. 23 Allegiant Airlines Chevrolet Silverado to the checkered flag. The win was Elliott's second victory in the NASCAR Camping World Truck SeriesT and his first ever at the historic Virginia short track. Now the Action Racing Collectables die-cast that commemorates Elliott's incredible Martinsville win is available to order.

Each is built on Lionel Racing's all new 1:24-scale Chevrolet Silverado tool and is detailed with all the scuffs, dirt, and dings seen on Elliott's winning truck. You don't want to miss this one. This diecast truck is made by Action (Lionel Racing), the #1 name in motorsports collectibles.

Lionel Racing artists have also painstakingly reproduced all the race damage seen on these winning trucks to create truly au. We have been serving thousands of NASCAR fans online since 1999. We also operate a full-fledged walk-in store located in Gainesville, GA. We take collecting diecast seriously.

The cars we send are mint, unless specifically stated. Your item is brand new. No smoke, no pets, Brand new out of a new case. This item is in the category "Toys & Hobbies\Diecast & Toy Vehicles\Cars: Racing, NASCAR\Sport & Touring Cars".