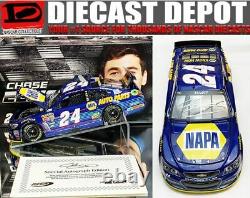 AUTOGRAPHED CHASE ELLIOTT 2016 DAYTONA 500 POLE WINNER NAPA 1/24 ACTION. Personally autographed by Chase Elliott himself. Comes with certificate of authenticity. Limited edition of 420 made. At 20 years, 2 months and 17 days old, Chase Elliott, driver of the No.

24 NAPA Auto Parts Chevrolet SS, became the youngest driver to win the pole for NASCAR®s biggest race, beating the previous youngest pole winner by more than three years. The Georgia native won the DAYTONA 500® pole with a lap of 45.845 seconds (196.314 mph). The front-row start for Elliott will only be his sixth start in the NASCAR Sprint Cup Series and his first series start at Daytona International Speedway. Along with his father, Bill, they become the fourth father-son duo to win the DAYTONA 500® pole.

Lionel Racing is excited to now offer for pre-order an Action Racing Collectables die-cast of Elliotts pole-winning No. 24 NAPA Auto Parts Chevrolet SS. Each die-cast looks exactly as it did after qualifying! This is an Action Performance Platinum Series collectible, the #1 name in NASCAR diecast collectible cars. We have been serving thousands of NASCAR fans online since 1999.

The item "AUTOGRAPHED CHASE ELLIOTT 2016 DAYTONA 500 POLE WINNER NAPA 1/24 ACTION" is in sale since Thursday, November 7, 2019. This item is in the category "Toys & Hobbies\Diecast & Toy Vehicles\Cars\ Racing, NASCAR\Other Diecast Racing Cars". The seller is "diecast_dealer" and is located in Gainesville, Georgia.